Our staff have a tremendous amount of experience. All of our pilots hold FAA Commercial or Airline Transport Pilot Certificates. Their backgrounds vary from flying for major airlines to crop dusting and banner towing, and some are ex-military fighter pilots. With their thousands of hours of flight experience, you are sure to feel safe and comfortable. Our chief mechanic holds an FAA “Inspector Authorization” license as well as an Airframe & Powerplant license. He has over 30-years of experience maintaining aircraft. 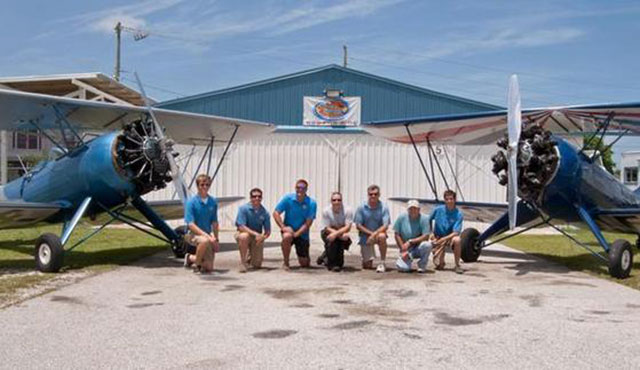 Our founder, Mark Grainger, began in aviation at the ripe old age of 13 working as a ground crew at a small grass strip airpark in Virginia. He has flown hang-gliders, sailplanes, crop dusters, banner planes, commuters, charters, airliners, fighter jets, and almost everything in-between.
Mark and his wife Cathy live in Cocoa Beach where they are raising two small future aviators, Kevin and Brian.

Steve Nesbitt is a South Lima, New York native who majored in History for his Bachelor of Arts at Geneseo State University. He found his love for aviation and historical airplanes while working through college as a lineman at a local general aviation airport. In his quest for knowledge, while working as a Adjunct Professor at Florida Institute of Technology, Steve earned his Masters of Science, with emphasis on Airport Design, Development, and Management.

Steve’s well-rounded experience brings an extra delight to each of his flights. He loves flying the WACO and the opportunity to share historical flights with our customers. He has flown over 1200 hours in our WACO Biplane.

Dwight Bell first started flying at the age of 16 when his brother gifted him flying lessons. He soloed at 17 in a Cessna 150 and a Cherokee 140, flying out of a small airport in Boyne City, Michigan. After taking a helicopter tour over the glaciers in Alaska, Dwight fell in love with helicopters, proclaiming them to be “man’s second greatest invention.” He returned to Florida and quickly earned his helicopter rating.

Dwight also uses his aviation knowledge to help local teenagers. He is executive director of a local ministry that uses aviation as a tool to teach teens how to make good decisions in life. “Successful flying is a microcosm of living a successful life. Safe flying involves training, self-discipline, following rules and setting goals – all important items for everyday life. We teach the specific aviation principle, and then show how they work in everyday life.”

Dwight resides in Indialantic, Florida, with his wife Angelia. They have three grown sons and three grandsons, along with about thirty teen students.

John “JC” Cherniga is a retired Air Force Colonel, having flown over 2400 hours in the H-1″Huey” and H-60 “Black Hawk” during his 26-year career, culminating at Patrick AFB, Florida, as the commander of the Manned Spaceflight Support Office (DDMS). His unit was the Department of Defense’s lead organization for providing worldwide contingency planning, training, and rescue assets for stand-by support to the space shuttle program during every launch and landing. They also directly supported the returning U.S. astronauts from the International Space Station aboard the Russian Soyuz capsules.

The son of career Air Force Fire Chief, JC graduated from Choctawhatchee High School in Ft. Walton Beach, Florida, in 1976. He then graduated from the U.S. Air Force Academy in 1980 with a Bachelors of Science degree in Management. While stationed at Malmstrom AFB, Montana, he attended Northern Montana College and earned a Masters in Career Guidance and Counseling in 1985. He was then selected to teach in the Dept. of Behavioral Sciences at the U.S. Air Force Academy, attended the University of Colorado, Boulder, as a full-time student, and earned a Masters of Education degree in Organizational Management (Org. Behavior and Development). Subsequently, he taught Organizational Behavior and Leadership courses at the U.S. Air Force Academy from 1990 to 1993.

Other highlights of his non-traditional Air Force career include: 3 years serving as Chief of Training and Standardization & Evaluation for the largest helicopter unit in the Air Force with 8 geographically separated detachments – the 37th Air Rescue and Recovery Squadron, F.E Warren AFB, Wyoming (1985-88); serving 2 1/2 years with the 56th Rescue Squadron at Naval Air Station Keflavik, Iceland (1995-97); serving 2 years at the U.S. Embassy in Asuncion, Paraguay (1998-2000) as the Air Force Representative to the Paraguayan Air Force; and serving 2 years at NATO H.Q. Northeast, Karup Air Base, Denmark (2002-2004) as the Senior U.S. Representative.

When not flying, JC enjoys traveling and cruising. He is also the sole proprietor of “J. Cherniga Images,” and sells his award-winning photographic images at art festivals throughout Florida and across the U.S.

JC is married to the former Joan Philipps of Conrad, Montana. They reside in Satellite Beach, Florida, with their cat Rocky, and are parishioners at Holy Name of Jesus Catholic Community, Indialantic, Florida.

Mike has been a Brevard County resident for over 50 years. Mike earned his A&P license in 1982 at the Merritt Island Airport – ironically the headquarters of Florida Air Tours! Mike also holds Inspection Authorization (IA), and is a certified FAA Private Pilot. Mike has been married for 30 years and has two children. In his free time, Mike works on one of his many antique cars and Beechcraft Bonanza. Mike has been a Florida Air Tours team member since January 2013.